I’m writing this post from a high-speed train in northern Italy, on my way to Carnivale in Venice. It’s where I do my best writing – planes and trains. My office is on the move; my home is wherever I’m staying for the night. I’ve held many titles – Professor Mulderig, Dr. C, advisor to the Minister of Defense – but none suit me more than my current incarnation, Leap of Faith Chloe.

Before I stopped settling for a generic life, I did what many brilliant minds do: I excelled at university, earned numerous degrees, and started on a path in academia. But last year, I left it behind and started a new path, one geared toward improving the world while finding myself. I became a travel writer, leaving behind the ease of home and embracing the backpack and laptop.

Now, I travel the world, visiting holy sites from all religions and attending religious festivals of all faiths. More importantly, I write about and photograph my experiences, sharing them with others in the hopes of promoting religiously tolerant and culturally conscientious travel.

I try to help others vicariously vacation through and encourage them to take their own leaps of faith. I believe the path toward a more tolerant world starts with learning about others’ cultures and beliefs, respectfully but adventurously.

This is the story of Chloe’s Leap of Faith.

A little getting to know me

After that, I earned a in Anthropology of Religion from Boston University, winning a Fulbright grant and serving as a Mellon Fellow. I was always exceptionally good at doing schoolwork, which is why I became a professor – I didn’t know what else I could be good at.

Back home: I still have a home in northern New Jersey, where my boyfriend lives and works in Major League Baseball. Though I miss him terribly, we talk daily, and he joins me on my travels when he can. I also have a wonderful cat, who sits by the window every morning and stares out at the sky, wondering when I’ll be home. I miss his furry cuddles more than anything else in America.

Travel shrine: My apartment also has a shrine to Anthony Bourdain, the patron saint of opinionated travelers. Under his watchful eye, I display all the excellent souvenirs and artifacts I’ve collected from my seventeen years of travels. I carry his image with me when I travel, and try to carry on his mission of making travel accessible to others.

Traveling Achilles’ heel: I am a terribly picky eater. It’s so bad that it works to my detriment sometimes, leaving me unable to find food at certain locations. I often miss out on the local dish because I can’t muster the courage to try it, or I know I won’t enjoy it. It’s a shame too, but I can’t seem to shake it.

Favorite cities: It has always been tied between Rome and Istanbul. I have visited both several and brought others there to travel with me. They each offer my favorite mix: ancient sites, epic religious buildings, stunning art and architecture, and fantastic food. I expect to retire to one of them someday, should I ever want to be grounded long enough.

As I’ve already mentioned, I studied hard at a number of and performed well. During this time, I worked hard to integrate a passion for travel into my experiences, living in North Africa and Europe and traveling throughout both regions.

After defending my PhD, I took positions as an adjunct professor. For those who do not know much about academia, this basically means I was a rented professor – a scholar for hire. But I began to grow discontent. Writing for fellow academics seemed pointless – I was publishing articles about the importance of culture to be read only by a handful of people who already believed that mantra.

In addition, American universities are increasingly focusing more on selling to customers (students and their parents) rather than training inquisitive minds.

My academic career was largely stalled because of my unwillingness to become a cutthroat post-doc or seek out a tenuous tenure track position at some middle-of-nowhere college.

I began consulting for governments and universities as a way to ‘make ends meet’, and while this was financially liberating, it left me unsatisfied.

Was this really what all the years of study were for, to follow an obvious path through meaningless academic hoops and play ghostwriter to ministers?

When the summer of 2017 rolled around, I was drowning in my mid-life crisis. At 35 years old, I had a profitable consulting career, a meaningless academic career, a reliable and stable boyfriend, and a precious cat… but no motivation. So I decided to go back to my roots of travel, and do something I had always dreamed of.

I jetted off to Southeast Asia.

The trip of a lifetime

For weeks that summer, I pushed myself to my limits on the road. I checked off my bucket list item of touring Angkor Wat in Cambodia. I meditated on in Laos. I wandered through wats in Thailand. I got very lost on a motorbike in rural Myanmar. And, perhaps most significantly, I fell in love with Vietnam. My father, whose sudden passing years previous had shaken me to my core, had fought in the war, and touring Vietnam gave me the opportunity to learn and find peace regarding his role in my life.

More than once on the trip, I mused that yes, this was what it finally meant to be on a ‘trip of a lifetime.’ I felt deeply moved, and spiritually satisfied. I pushed myself past my physical and mental limits. And I was incredibly sad to return home (though happy to be reunited with my boyfriend and kitty).

But I was struck by how much less color there was at home, how duller my senses felt when no longer on the road.

When I returned to teaching in the fall, I knew that I didn’t fit anymore. I didn’t fit at university, I didn’t fit into urban American life. I felt like a black sheep in my family, in my social groups, because the obvious path I had always followed no longer seemed like my own. As the months rolled on, I felt more and more bored, in a haze of ordinariness.

Simultaneously, I wondered what real impact I was having, being ground to a paste in the academic machinery of American education. It was increasingly clear that I wasn’t happy, satisfied, or impactful.

As 2018 progressed, it became clear that a massive life change was necessary. After years of friends asking for travel advice, it became clear to me that I had used anthropology as a crutch: an excuse to follow a respectable academic path while actually wanting to live in other cultures and experience other perspectives. I asked, was I not using my abilities to write and photograph to help all those who wanted to learn from my experiences traveling?

Why? GIF from Rachelmcadams GIFs

2018 was also turning into a year in which I was no longer confident that American society was practicing the tolerance its citizens preached – or whether we were even bothering to preach tolerance at all. Looking for a way to promote the cultural and religious empathy and sharing that had been such an inherent part of my experiences as an anthropologist, I began to explore ways to reach a wider audience, beyond the classroom.

I decided to unsettle – to stop settling for an unfulfilling career path and to disconnect from the stationary doldrums of being ‘at home.’ I left my university position and padded my accounts by consulting heavily. I enrolled in blogging, photography, and videography courses through well-known travel blogger Nomadic Matt. Then, I built my own website from scratch, bringing to life a colorful vision that I hoped would help others to engage with my experiences.

I took a leap of faith, and became a travel blogger, bouncing from continent to continent, visiting both famous and off-the-beaten-path religious sites. I started attending religious festivals across the globe, from Hindu pilgrimages in Kuala Lumpur to St. Pat’s parades in Dublin, and writing about my experiences. I always strive to be honest and open about my experiences, while also providing tips and guidance to help others see the beauty and potential for self-growth possible with travel.

I now travel full and no longer settle – neither with my feet nor my heart.

I plan to keep writing and sharing my experiences. On the short-term radar are a road trip solo through Armenia, backpacking through South Korea, and celebrating Semana Santa in Spain. I set my own hours and destinations – my readers are my bosses, and I love making them happy.

It’s not easy – setting one’s own deadlines is difficult, and there is a lot of loneliness on the road. Building one’s viewership is no easy feat. Depending on social media and reads for affirmation can sometimes be soul crushing.

But every day I take time to stop, and silence my mind, and reflect. I no longer go on trips of a lifetime, but have set myself up for a lifetime of trips. I get so many little moments of pure magic – sunsets, new foods, profound rituals, friendly hosts. When I look back, I see the repetitive ruts my life had been stuck in before. When I look ahead, I see new stepping stones, and can’t wait to leap from one to the next.

Dr. M. Chloe Mulderig is an anthropologist specializing in popular religious practice. She left a successful career as a professor and cultural consultant to become a travel blogger. Today, she tours the globe, visiting and documenting holy sites from all world faiths, and participating in major religious festivals. Through her blog, Leap of Faith Chloe and videos, she hopes to encourage culturally conscientious travel, helping others to take their own leaps of faith and experience new places and peoples.

Interested in reading about taking a leap of faith, but don’t have time right now? Pin it here!

The Beauty and Opportunities Created by Changing Paths 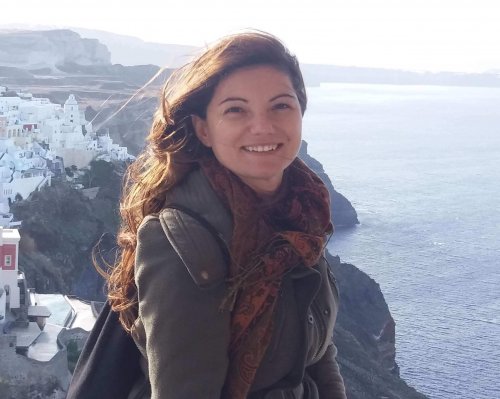 I help adventurous folks live and explore more mindfully. I guide them inwards to help them discover their inner sources of peace, joy, and love, so that no matter where in the world they are, they have everything they need to be happy.
Read more about me and my wandering ways here. 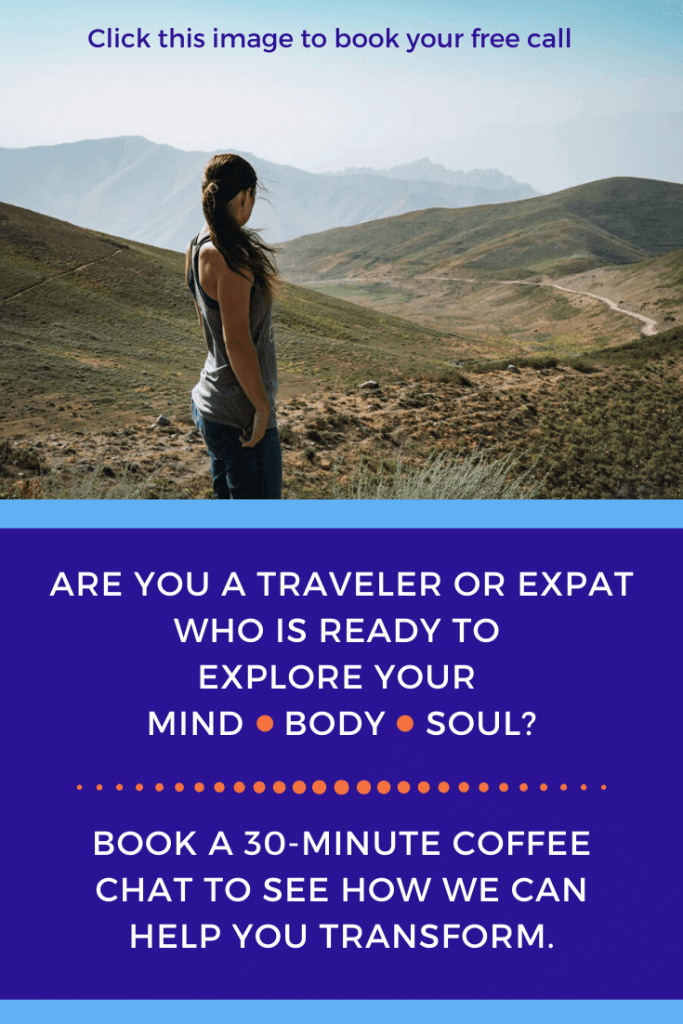 Although my first book, The Trip to Your Truth, la

Today, I leave home to head back to my other home.

While moving through phases of change sometimes I

The trip to my truth always includes nature. The

4 days until my new book is officially out in the

Soaking in every minute of the transformation. I

Only 3 more days until Mindful Living, Loving, and

Are you a global explorer, forced into stagnation

Today is day #2 of our masterclass Creating Travel

What will you do today to nourish your body, mind

How do you create bliss when travel isn't an optio

If travel is what usually brings you joy, where ar

Sundays for the soul With Mondays to Fridays main

WHAT SHE SAID: "I would sincerley recommend Jo a